In December 2007, the Montgomery County Department of Environmental Protection (DEP) teamed with the Northeast Maryland Waste Disposal Authority (NMWDA) and its engineering contractor, C B & I to design/build/operate two landfill gas-to-energy facilities at the Oaks and Gude Landfills. Design and permitting were completed within one year after seven months of construction and start-up testing; the two beneficial use facilities that collectively generate 3.2 Megawatts (MW) of electricity came online in late June 2009 and are continuously producing “green” energy! 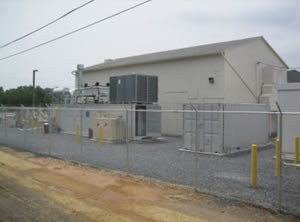 The Basics – During operation and closure, a landfill will generate various gases, including methane via waste decomposition. Under the Resource Conservation and Recovery Act (RCRA), solid waste management facilities are required to control the migration of landfill gas, primarily due to the explosive potential of methane. As a point of reference, natural gas typically consists of 90 percent methane, whereas landfill gas ranges from 40-50 percent methane.

The gases generated by waste decomposition are collected through a network of vertical and horizontal pipes, which are connected to a blower (e.g. fan) that exerts a negative pressure on the landfill. The blower draws the gas to a Flare Station for flame burning (no energy value) or to a gas-to-energy facility where the gas is burned in an internal combustion engine that will turn generators and subsequently produce electricity.

The Facility – The Gude Landfill is approximately 100 acres and is located at 600 E. Gude Drive in Rockville, MD. Previously, from 1985 to 2006, a gas-to-energy facility operated on the Gude site that initially generated 2.7 MW of electricity. The new gas-to-energy facility utilizes approximately 300 scfm of gas in a single Jenbacher GS 316 (see above photo) and the remainder of gas is burned in the existing enclosed stack flares. The single engine with support equipment (pretreatment skid, transformers, switchgear, etc.) generates and transmits approximately 0.8 MW of electricity, as well as renewable energy credits (RECs).