In January 2009, Frederick County, Maryland, teamed with the Northeast Maryland Waste Disposal Authority and its contractor, DCO Energy (DCO), to design/build/operate and privately own a landfill gas-to-energy facility at the Reichs Ford Road Landfill. As part of the agreement, DCO purchased and installed a landfill gas collection system for the County. Design and permitting were completed within one year, and the facility is in the final stages of construction. Start-up testing at the beneficial use facilities began in May 2010. The facility will generate approximately 2.0 Megawatts (MW) of electricity and started commercial operations in late June of 2010, continuously producing “green” energy! 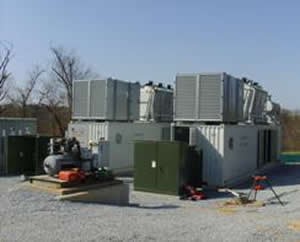 The Basics – During operation and closure, a landfill will generate various gases, including methane via waste decomposition. Under the Resource Conservation and Recovery Act (RCRA), solid waste management facilities are required to control the migration of landfill gas, primarily due to the explosive potential of methane. As a point of reference, natural gas typically consists of 90 percent methane, whereas landfill gas ranges from 40-50 percent methane.

The gases generated by waste decomposition are collected through a network of vertical and horizontal pipes, connected to a blower (e.g. fan) that exerts a negative pressure on the landfill. The blower draws the gas to a flare station for flame-burning (no energy value) or to a gas-to-energy facility, where the gas is burned in an internal combustion engine that will turn generators to produce electricity.

The Facility – The Reichs Ford Road Landfill site, located off of Reichs Ford Road in Frederick, is 530 acres. It is comprised of two distinct fill areas totaling approximately 130 acres. The gas-to-energy facility consists of two Jenbacher GS 320 engines. The existing candlestick flare will continue to be utilized on an as-needed basis for gas control to supplement the gas-to-energy facility. The two engines and their support equipment (pretreatment skid, transformers, switchgear, etc.) generate and transmit approximately 2.0 MW of electricity.

The Green Aspects – The Reichs Ford Road Landfill Gas-to-Energy Facility will produce enough electricity to power approximately 1,200 homes year round. Estimated environmental offsets from the Facility include the reduction of an estimated 10,100* tons of carbon emissions with respect to diverting power generation from coal-burning power plants. This is equivalent to planting approximately 18,100 acres of trees or taking more than 16,200 cars off the roads.